Home
/
News
/
Who Is Kweku Smoke? I Don’t Want To Know Him – Amerado 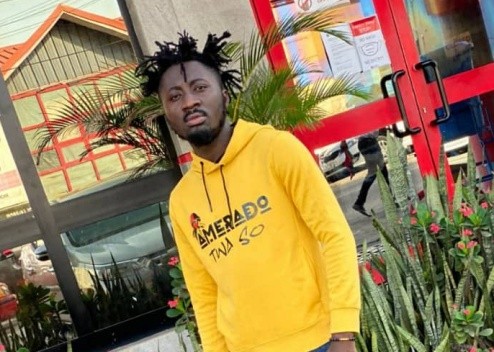 Who Is Kweku Smoke? I Don’t Want To Know Him – Amerado

Ghanaian Hip hop artiste, Amerado has said that he doesn’t know who Kweku Smoke is and doesn’t even want to know who he is.

Things haven’t been cool between these two as Amerado emphatically stated that Kweku Smoke is rude. He made some other statements though.

According to him, he messaged Kweku Smoke when he arrived in Ghana after watching his video as a way of eulogizing him but it didn’t end well.

Kweku Smoke went on to screenshot the text and post on Twitter. It didn’t end there! He also insulted him and Strongman which he tagged as rude.

“When Shatta Wale and Sarkodie came with this Sub Zero, Shatta Wale got angry basically because he has been dissed or something. Smoke then came out to diss Shatta Wale in favor of Sarkodie.

I also did a song called ‘Bars stop’  and in a line, I told him to focus on making hits and leave those big cats to do their thing because, in the long run, their fans are our fans” he told Andy Dosty on Hitz Fm.

The “Menp3” hitmaker indicated that Kweku Smoke can’t disrespect Shatta Wale because Shatta Wale could be of help to him one day.

He subsequently bragged that Kweku Smoke can’t stand with him lyrically because he is a kid. Meanwhile, Amerado has a new song out titled “Twaso” which features Famaye. Go cop that!!

Paracetamol in pregnancy may damage your daughter’s fertility It is……