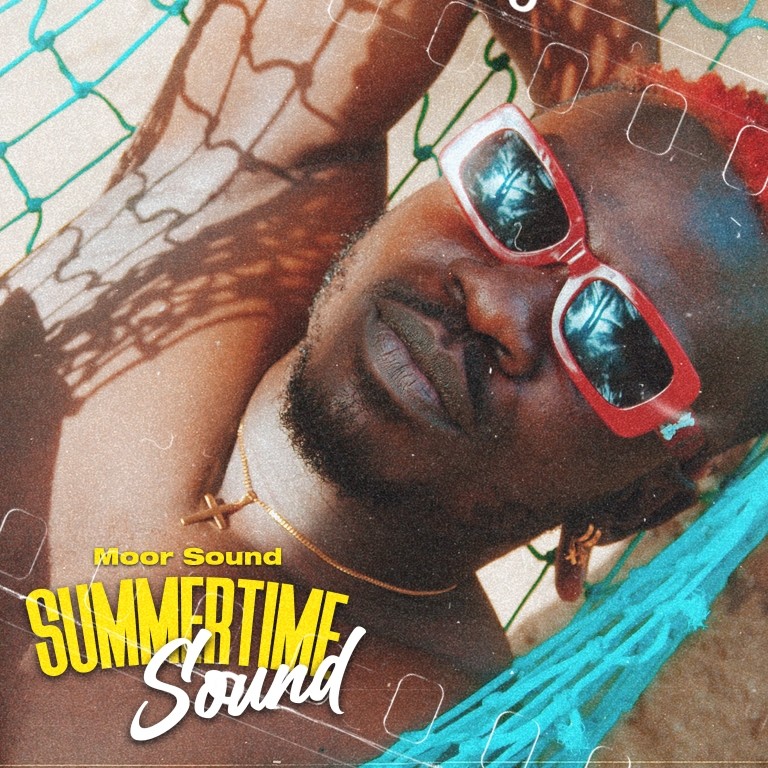 With the notion that people move on quickly in mind, Ghanaian producer, Moor Sound has kept his relevance alive by working relentlessly and putting out lots of music with different artists after his first number one project, “Here For A Good Time Not A Long Time”.

His consistency has earned him a fan base of listeners and admirers and now, he’s finally ready to present his debut solo project “Summertime Sound” as a producer. Stream here: https://ditto.fm/summertime-sound

Moor Sound describes this project as an extension of himself; a reflection of his free-spirited side that just like his name suggests is open with endless capabilities.

“People usually associate me with Hip-Hop/Trap music because of all my contributions to that genre of music. This is me just letting people know they shouldn’t box me up, I’m un-limited. I’m gonna keep coming with different vibes”. This 7-track album filled with breezy feel-good songs centered around the summer theme of love, fun, and sex effortlessly evokes feelings of pleasure and joy in listeners.


After dropping the Pt. 1 of this song in March with $pacely, BuMan and Yung D3mz, Moor Sound had no idea he will be dropping a Pt 2. to ‘Obaasima’ which is an affectionate term for “Young lady” in the Twi dialect. The smooth feel-good song is the perfect summer jam that immediately transports you to a good time and can only be described as sweet and melodic. “Obaasima Pt. 2 just happened. $pacely and I had worked on part 1 which we dropped in March. There were no plans for Pt. 2 until Yaa Pono pulled up to the studio. We were about to shoot a music video in two days and Yung D3mz had mentioned he wouldn’t be able to make it to the video shoot due to personal reasons. Shortly, after $pacely came by my studio with Yaa Pono to record a few songs. I played ‘Obaasima’ for him, he loved it and he gave me a verse. I thought what he did was dope and invited him for the music shoot and… that’s how Obaasima Pt. 2 happened. It was a last minute miraculous save’’.

On ‘Mood’, Nana Benyin, the featured artist, did a great job at conveying his feelings through his melodic voice in smooth transitions from the Ghanaian Twi language to English. “Mood is a testament to the power of collaboration. Altra Nova (a music producer) was in my studio and he just played the chords you hear in the song but… He never finished be-cause his Uber came and he had to leave. Days later, I invited Nana Benyin to the studio. I played the chords and he wanted it so, I worked on the production, built it around the chords and we ended up recording the song days later”.

‘Oyibo’ which is a Nigerian term for foreigners (White people) but is also used as an endearing term for light skinned women is a soft yet vibrant love song which is as a re-sult of the production. The trumpet-like addition fused in with the drums on the chorus gives a beautiful effect to the song. “For Oyibo, I was going more for the East African music vibe on the production. Getting Questo and TFK on board was not a problem at all. We just vibed in the studio and every-thing came out naturally. Questo actually finished his verse at the same time I finished the beat so you can say, we built the song together from scratch”.

One good thing that came out of the COVID-19 pandemic for Moor Sound was the fact that he realized he was capable of anything. The song introduces a new version of Moor Sound: The artist. “I recorded this song during the lockdown. I spent that whole period in the studio and one night; I worked on the production for Machine. I was going for a Bollywood Turkish kind of vibe for the production but, I also wanted the vocals to be as African as possible. One thing about me is, I usually have a melody in my head anytime I work on a beat but the thing is, this time, there was no way an artiste could come to my studio, so I worked with my melody and put my vocals on the song and that’s how I created Machine’’.

‘Ku Se’ is the kind of song people lose themselves to. It’s a Ghanaian phrase in the Ga language which means “arch your back.” Kiddblack offered the very catchy chorus in Ga and in line with the happy yet very raw and local nature of the song, Tulenkey and Yaa Pono, experts in conveying this in their verses, were featured on the song. “Ku Se was recorded entirely based on the vibe that was in the studio the day I made the beat. We were celebrating ‘Here For A Good Time Not A Long Time’ going number 1 at the studio. After a couple gin & limes, I had ended up with the beat for Ku Se. It just had that very local vibe and I asked Kiddblack to hop on. I’d heard his stuff with Nshona Muzik so I knew he could do this and he killed it. He actually got me to speed up the song a little bit to what we have now’’.

‘Kwahu Bepo’ which translates as Kwahu mountains, is an area in Ghana made up of steep mountains inhabited with several communities. The song has a Highlife music feel to it with typical traditional Akan music elements. Kobby Keita takes breaks in the song to say a few words before segueing back into the music. Even the hook has pro-verbial elements, likening life to climbing the Kwahu mountains. “Kwahu Bepo was an unexpected track. The production was just different for me and I wanted someone to do something different on it. The funny thing about it is, I featured Kobby Keita, a trap artist. When I played the beat for him, he loved it and said he’d work on it. The day he came to record; he brought Nana Calis who did the singing and… We ended up with this Highlife type of music, and I loved it. Nana Calis definitely added to that original Highlife tone’’.

‘Love Ninja’ features Copta and Tibu. The production, heavy on the drums with minimal instrumentation gives the song a pleasant feel and the simplicity in it all resonates with the feeling the two artists sing of. “Love Ninja actually happened when Magnom, Copta and Tibu followed me to my studio one day after a session at BBnZ Studios. Magnom ended up co-producing with me and most of the work was done with Tibu’s style in mind’’.

‘’Summertime Sound’’ is Moor Sound’s statement to every artist and listener that he is a cocktail of several abilities. For him, this album is just the beginning and he promises that he’s got many more surprises up his sleeve.

Born Andrea Owusu popularly known as Efia Odo is a……

MC Randolph – Why (Prod. By Only Vibes)

MC Randolph – Why (Prod. By Only Vibes) Versatile Florida-based……

I Will Slap Obinim If He Doesn’t Do Anything And……