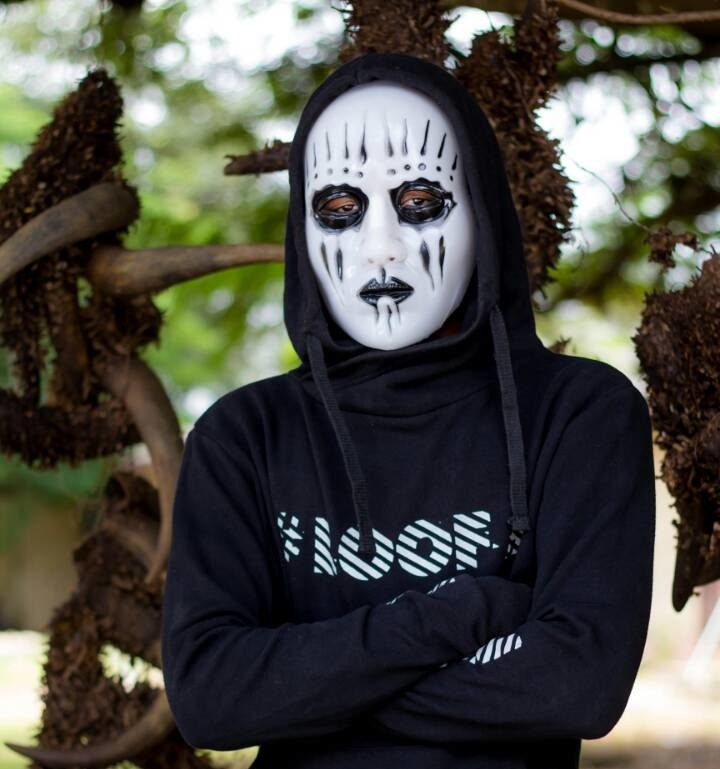 Due to his branding, I can’t show his full biological name, so let’s just cut it down to Royye, and in the music scene known as eNZYM a.k.a. Ghost/Weirdo/ the god hails from Navrongo in the Upper East Region of Ghana.

In his High School days, eNZYM started playing with words: that is using words to create different meanings, which came from his extreme passion for poetry. He was into wordplay, poem writing and spoken words until he first rapped Eminem’s “Not Afraid” at the School`s entertainment show but by then he didn’t discovered rapping as his talent . Been a weirdo and a geek in his High School time, He couldn’t attach himself to people well. eNZYM was a very shy boy. Luckily, he met three other guys, [Abdul – Rahaman (HedLynz), Marfo Ike (Spartus) and Hayford Lebene (bluRAY)], they formed a clique and named it “LOOF” in 2010 with an ambition of owning a corporation when they grow up and that was the company’s name they planned out. “LOOF” means “The Life Of un-Ordinary Folks”.

He just do it for fun as any other music lover does. In 2012 eNZYM featured on a cypher hosted by a clique, “Teflon Dons” in his high school. The clique wanted to make a track with other rappers in the school so he tried it out and went to the studio to record the verse that he had. It was his first time recording in the studio. His verse attracted the attention of many, most of his friends in the school who were thrilled by poems, spoken word and poetry kept approaching him to write for them poems or give them rap freestyle.

He started having deeper clinging to music and felt he could write out songs instead of just poems and spoken word that he has been writing. He changed his nickname to “Enzym” in 2014, that same year. He was just learning how he could get some of the people in the music industry to learn from so that he could kick-start his music career. In 2016, eNZYM met a Kumasi based artiste, MickyDarling and he spoke to him about a song he wanted to record. MickyDarling was enraptured by the concept of the music so he agreed to be featured on the track.

That was when eNZYM started doing music professionally. The collaboration became a success. They discussed more about the project somewhere around July that year. They got a beat from an American sound engineer, Trapezoid. MickyDarling led him to “Armagiddon“, a sound engineer based in Kumasi when eNZYM received the beat to recorded the track. That was his first ever professional studio master track, titled “SiKK” which is a hardcore Hip-hop tune and was released on the 1st of September.

It was his first ever professional studio work. This is why eNZYM always credit MickyDarling for helping him reach where he is now in the music industry because that tune, SiKK was just the perfect key which opened more avenues for him. eNZYM took some time to carefully analyze the music fraternity: He realized he needed to build a brand for himself and that called for the need to get a a more professional and suitable stage name different from any other artiste.

eNZYM is a Hip-hop, Hiplife and Hardcore Rap artiste. He is a multi-lingual artiste, fluent in 5 main languages: English, Twi, Fante, Hausa, and Pidgen English. His Style of music is centered around dark-themes, societal issues, usage of rap elements, his personal life and emotions and basically what a featuring artiste brings on board. He is thinking of switching into other genres soon. Stage Name eNZYM is also one of those artistes who struggled to settle on a stage name.

He was once called MegaMYND, Rebel, Talismann and OmeggaRedd. His friends, school mates and neighbours who listened to his rap started saying he rap like a Robot so he changed his nickname to “Robot” but later on because he thought it sounded too basic he shortened it to just “Bot” though people used to call him “Rap Bot” as they say he raps like a robot And So he took that and remade the name to “Nzymm Phlo·Bott”, in 2018, he had to change the name to “eNZYM” due to difficulty for people pronouncing, and people loved it and that became his brand name.

Obiba Sly Collins – Real Love This year has been……