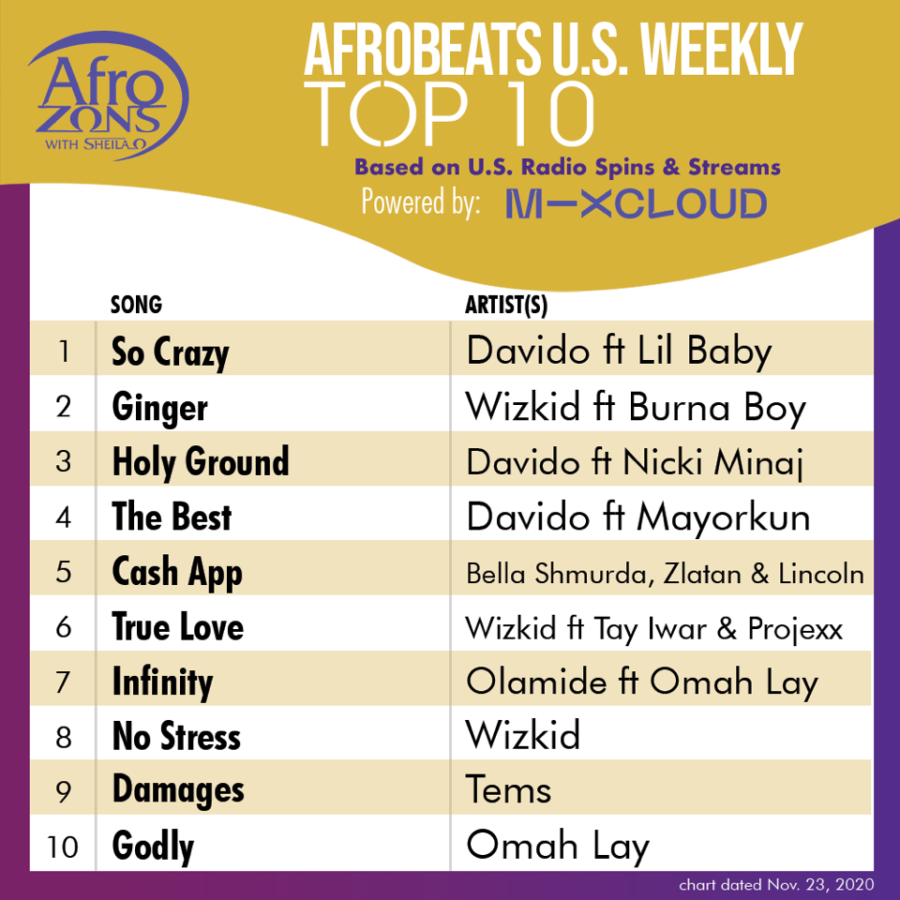 It is official! Sheila O’s Afrozons—in partnership with Mixcloud—debuts the first Afrobeats weekly top 10 charts. Using algorithms and BDS Nielsen data for validity, Afrozons determines the exposure to the US audience through spins on terrestrial radio in the US and digital streams from all digital sources in the US (Apple Music, Spotify, TIDAL and more).

Appearing on this week’s list are recent releases by Wizkid, Tiwa Savage, Burna Boy and more. Stay tuned as we roll out more for the weeks ahead.

Afrobeats has been a growing genre of music for a few years now, and the genre shows no signs of slowing down. In the US, specifically, it was a big deal to understand and track the growth and consumption of the genre.

The weekly tracking period will begin Friday (to accommodate new releases) to Thursday. The charts will come out every Monday. This tracking period also applies to compiling online streaming data, radio airplay, which, unlike sales figures and streaming, is readily available on a real-time basis.

Sheila O is an on-air radio personality, booking agent, and books 90% of the concerts, festivals in Africa. Sheila is responsible for bringing JAY Z to Africa for the first time in 2006, which he served as a UN Ambassador providing clean water and functioning water systems to underprivileged areas.

Some of the traveled countries included Nigeria, South Africa, Ghana, Gabon, Tanzania. Sheila is the exclusive agent for Fly Time Music Festival, Heineken, and Stanbic Bank (Zambia) and responsible for the bookings of several acts such as Boyz II Men, Mase, Koffee, Davido, Burna Boy, Megan Thee Stallion to name a few. She is the annual host of the African Festival of Arts in Chicago.

AfroZons is the first-ever Afrobeats show on a major US radio FM network. It is a weekly showcase of the latest cultural trends, topical conversations, and music from Africa, including urban fusion sounds from the Western world to the motherland.

The first show aired February 5, 2018, and currently runs every Sunday from 10 PM to 12 midnight. The AfroZons show launched in February as part of the Black History Month celebrations for Power 92.3 Chicago.

AfroZons radio show is the bridge between the African culture to America by highlighting the array of sounds and cultures from the continent. Giving African international exposure via radio airwaves.

With the African sounds and cultures permeating the globe, enthusiast of the culture varies from African born to people who embrace and identify with Africa diaspora. According to the Chicago Tribune, on June 14, 2013, Chicago has the fifth largest African population in the United States.

AfroZons broadcasts from Chicago’s Power 92.3 FM. Popularly know as the “No. 1 in the streets.”

Power 92.3 is known for breaking new grounds in urban music and has been instrumental in launching the careers of several artists such as Kanye West, Chance the Rapper, and many more. Recently, the AfroZons show has expanded its reach into many more markets. Listeners can now tune into the show from Houston, Pennsylvania, Washington DC, and Miami.

The AfroZons show is a popular show on the SiriusXM national platform: HURVoices Channel 141. It is syndication in Chicago, Houston, Pennsylvania, Washington DC, and Mami.

Counterfeit Currency Floods the UK The UK government introduced these……

PS The Rebels Make Black History NOW With The Top……